What the WEF and the Fed Have in Common

This week, the global elite arrived by private jet and motorcade in Davos where they plan to spend the next several days lecturing the rest of us about the sacrifices we’ll need to make in order to create a greener and more equitable world.

As they dine on the finest cuts of beef, they’ll discuss how necessary it is for the peasants to eat bugs, and devise schemes to coerce us into their vision for our lives reimagined.

I’m old enough to remember our friend Glenn Beck working himself into a dither on Fox News every night trying to warn us about the global plan for world-domination by a few unelected elites.

A lot of people ignored Glenn because back in those days the world seemed like it was a pretty normal place and the things Glenn said sounded to many like conspiracy theories.

Fast forward to a post-covid world, and we’ve got Klaus feeling totally comfortable saying things like, “The problem that we have is not globalization. The problem is a lack of global governance.”

Yikes. Some of us owe Glenn an apology.

I wrote pretty extensively about the WEF’s Great Reset back in early 2020 when I realized just how serious these people were about using the covid pandemic to remake life on a global scale. Suddenly, these unelected, self-appointed global saviors were saying the quiet parts out loud and they had my full attention.

Do you guys remember this video that has since been removed from the WEF site because well… it turns out people weren’t quite ready to own nothing and live in pods while subsisting on crickets and Soylent Green?

Totally creepy, but make no mistake—just because they realized they had overplayed their hand and dialed back their messaging doesn’t mean that they have in any way changed course. This future is still the one they have imagined for us, and the one they are actively working on crafting as I write this. 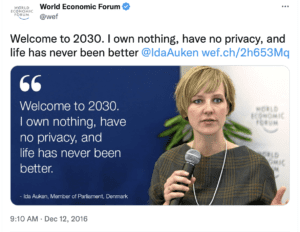 As I was thinking about how we managed to get ourselves under this corrupt group of evil elites, I realized that the WEF actually has a lot in common with the Federal Reserve.

The WEF and the Federal Reserve are like two peas in a “just looking out for you,” pod.

The Davos folks are like the fancy dinner party where all the rich and powerful from around the world gather to discuss how to make more money and save the world… or at least pretend to. Meanwhile, the Fed is like a bunch of nerdy guys huddled in a basement playing Dungeons and Dragons. Only D&D is more realistic because we all know you can’t actually centrally plan an economy, control inflation, or create jobs.

At least the D&D guys know they’re participating in make-believe. (And at least their plots don’t cause soaring inflation and mass real-life suffering!)

Both the WEF and the Fed are made up of a bunch of unelected people with a ton of power over our everyday lives, and the existence of both has gone pretty much unnoticed by the average person.

I wrote The Tuttle Twins and the Creature from Jekyll Island as a way to help kids (and parents) learn about the history of money, and the Federal Reserve. 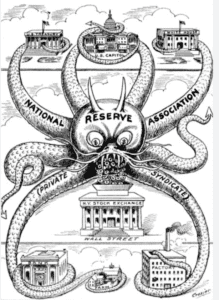 With record inflation, and a recession on the near-horizon (or already happening) it’s never been more important for people to understand that the policies and practices of unelected and unaccountable people are making our lives a lot harder than they need to be.

My hope is that as parents learn more about the Fed, they’ll take it upon themselves to teach their kids so that hopefully these powerful central planners will finally meet a generation that says, “No more!”

And it’s not just the Fed. There are (unfortunately) endless numbers of bureaucrats, alphabet agencies, and unelected “officials” who exercise enormous power over the citizens of this (supposedly) free country.

I’ve written a lot of books that tackle abuses of power by those who are supposed to act as protectors but act instead in their own self-interest. Now is a great time to check out our new products to see if there’s anything you’re missing in your library.

And who knows, maybe my next book will be about Klaus and his lizard-friends and their obsession with making us all live in wind-powered pods.