There’s Nothing More Tribalistic than War

As the Russia-Ukraine conflict continues to unfold, the rhetoric surrounding the war seems to get stronger by the day. Just when you think the politicians have exhausted their supply of condemnations, they come back with more for our consumption. The remarks are, in many cases, deserved. Putin’s actions are deeply immoral, and they ought to be named as such.

But, as so often happens in war, the target of these verbal assaults has quickly become blurry. Some days “Putin” is the problem. Other days it’s “the Russian aggressors” or simply “the Russians”.

Unfortunately, this blurriness has not been confined to rhetoric. Around the world, Russian products are being removed from stores, not because they have anything to do with the war, but simply because they come from a certain country. “Russia must be punished,” we are told, “because of its egregious acts.”

Whether by intention or by accident, it seems we are quickly finding ourselves in a world where everything “Russian” is tainted. Never mind that many of the people in Russia don’t support the war:the whole country deserves condemnation – at least, according to the current prevailing narrative.

I can’t help but be reminded of Japanese internment during WWII, a horrific abuse of civil liberties  ushered in by progressive hero President Franklin Delano Roosevelt. Though we are hopefully  far from enacting such draconian laws  today, I can’t help but notice a parallel in the kind of thinking that led to them.

You see, when some people are seen as “the enemy” simply because of their ancestry or where they were born, innocent people get caught in the crossfire.

The root of the problem is an old, stubborn ideology: collectivism. All too often, we see people first and foremost as members of groups rather than as unique individuals.

There’s nothing wrong with belonging to groups, of course, or appreciating your group identity. We all have families, friends, and some of us even belong to a faith. The problem comes when group identity becomes paramount, and when an  “us vs  them” mentality kicks in.

This mentality is evident in a lot of collectivist rhetoric. “We are the good guys,” we tell ourselves, “and they are the bad guys.” “Our team is noble and upstanding, their team is wicked and evil.”

This kind of thinking can show up pretty much any time groups compete. Think about sports teams going head to head, or businesses vying for customers, or politicians during election season. It’s always about us vs. them, our tribe vs. their tribe, the good guys vs. the enemy.

In its ugliest form, collectivism devolves into all out tribalism. At that point, we will do anything and everything to help our tribe and hurt the other tribe.

The Tuttle Twins experienced this kind of tribalism firsthand when they went to camp in The Tuttle Twins and the Golden Rule. They learned the hard way what can happen when group interests take precedence over respect, kindness, and fair-play. You may get an advantage in the competition for a while, but in the end, everybody loses. Attacking other teams invites blowback, after all, and it’s only a matter of time before you have a war on your hands. 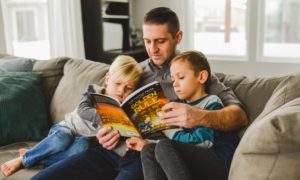 So, why do we fall for collectivism so often? Why do we slip into the tribalistic mentality? I think part of it is a defense mechanism. When we perceive an attack on our tribe, it’s only natural that we want to fight back and get revenge.

Unfortunately, the people we punish aren’t always the people responsible for the attack. Since we’ve bought into tribalistic thinking, we often inflict harm on innocent bystanders, declaring them guilty by association.

But if we’re honest with ourselves, we know that’s not how guilt works. People can only be held responsible for their own actions. Most Russian citizens have no part in this war, and they shouldn’t be faulted for the crimes committed by their government.

Here’s the challenge: collectivist thinking will not go away on its own. If we want the next generation to see each other as individuals rather than tribe members, we need to teach them a better way. That’s why I wrote The Tuttle Twins and the Golden Rule. It’s designed to be a tool for teaching our kids to value each other in their dignity as individuals.

Of course, team spirit and friendly competition are healthy when done right. But if we’re not careful, they can quickly devolve into all out war. And though we may have our differences, surely that’s a future we’d all rather avoid.