The Messed Up World of “Covid Relief”

Us taxpayers fund a lot of crazy things, don’t we? From the $400,000 camel statue to the infamous $2 million bathroom… we’ve seen plenty of examples over the years of government waste and mismanagement.

And recently, with pandemic relief money raining down from D.C., state and local governments have had an opportunity like never before to think up new projects. And boy, have they been creative!

According to a recent report, the list of projects being funded by federal Covid ”relief” money includes all kinds of laughable expenditures… From building a Florida hotel with an 11,000 square-foot spa, to a minor league baseball stadium renovation in New York, to tourism campaigns in Puerto Rico, golf course irrigation in Colorado, helping an Iowa county buy a ski resort, and my personal favorite: $2.5 million for parking enforcement officers in Washington, D.C.

And that’s just scratching the surface. So where is all of this coming from, exactly?

The answer is the American Rescue Plan, a $1.9 trillion federal “relief” package that was signed into law by President Biden on March 11, 2021. As part of that package, $350 billion was allocated to state and local governments to help them weather the fiscal crisis brought on by the pandemic… And wouldn’t you know it? These governments chose to spend the money in some of the most nonsensical ways possible.

Whether these governments really needed the funding has been a matter of fierce debate since the beginning. But it doesn’t take a rocket scientist (or ski-slope engineer) to see that  these governments aren’t exactly in the business of “Covid relief.”

I find the story behind the hotel in Florida particularly disconcerting…“Broward County initially routed $140 million in federal coronavirus aid to the [hotel] project,” the AP continues, “which ran against Treasury Department rules that generally bar spending the money on large capital projects.”

This is supposed to be COVID-relief money, after all. But, as it turns out, there was a gaping loophole in the rules, one that county officials quickly exploited.

“To get around the prohibition, the county adopted a common workaround. The agenda from a Feb. 22 county board meeting details how: In a back-to-back series of unopposed votes, commissioners clawed back the federal money they had given to the hotel. They then transferred it to the county’s general fund, describing it as a federal payment to cover lost tax revenue, which is an acceptable use. Then the cash was transferred from the general fund right back to the project.”

Technically, they didn’t break any rules. As County Administrator Monica Cepero insisted, “no federal funds will be used to pay any of the cost of developing the Hotel Project.”

Of course, it’s not hard to see what’s really going on here.

Putting aside the intended use of the funds, it’s tempting to think that these initiatives are still economically beneficial. After all, these funds are giving governments a boost, which will (in theory)provide benefits to communities around the country…even if they aren’t necessarily related to COVID. At least, that’s what you’d think, taking politicians at their word.

In reality, this kind of resource reallocation is quite harmful. For starters, there will likely be private hotels, ballparks, and ski resorts that will lose customers simply because the government rigged the odds against them.”.

By subsidizing specific initiatives, the government is effectively picking winners and losers in the market. Instead of succeeding by providing the most value at the lowest cost, projects are succeeding because they are getting free money from taxpayers. Not only is this bad for the economy: it’s plain unfair.

Ethan and Emily Tuttle are no strangers to these kinds of practices: they learned all about them in The Tuttle Twins and the Messed Up Market. While running their Children’s Entrepreneur Market, they noticed a kid who was undercutting the others because he was being subsidized by his parents. As a result, the market was all…well, messed up! 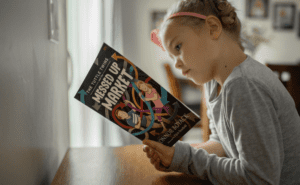 Unfortunately, big spending programs like these tend to be fairly popular. But they don’t have to be.

By teaching our kids about the realities of government spending and economics, we can make sure they don’t fall for the crazy… Whether it comes in the form of government-owned-ski-resorts, “free” healthcare, or whatever else is trendy by the time they’re voting.

Ready to fight back? Join me, along with the Tuttle Twins team, and let’s raise a generation of kids that know better.