The IMF, the Federal Reserve, and Marxist Central Bankers

You’ve seen the same inflation I have… prices are up everywhere.

And Biden is trying to call it the “Putin Price Hike” in order to shift the blame away from his (and Trump’s) money-printing bonanza. It’s a lie meant to misdirect you from understanding the real source of the problem.

Meanwhile, what do the central bankers say? These are the folks who operate the (digital) money printers. They prefer people think of them as part of the government (and thus subject to oversight)… but they’re not. The Federal Reserve, for example, is a network of privately owned banks.

At a recent meeting, the Fed chair joined some of his central bank counterparts from elsewhere in the world. Among them was Kristalina Georgieva, head of the IMF (International Monetary Fund) which is based out of D.C. (The IMF makes risky loans to unstable governments and hands out our tax dollars to politically-connected companies.)

In a moment of astonishing frankness, here’s what she said:

I think we are not paying sufficient attention to the law of unintended consequences. We make decisions with an objective in mind, and rarely think through what may happen that is not our objective. And then we wrestle with the impact of it.

Take any decision that is a massive decision, like the decision that we need to spend to support the economy. At that time, we did recognize that may lead to too much money in circulation for too few goods. But didn’t really quite think through the consequence in a way that up front would have informed better what we do.

One wonders if this rare expression of intellectual humility is actually an effort to dupe us into thinking that these central bankers care about our economic situation, other than those of their banks’ owners. Nah.

The fact is, the dollar has taken a beating—and it may get worse. In world history, reserve currencies (money that’s used by many other countries for international exchange and settlement) only last about a century. And we’re already past a century with our “money”: 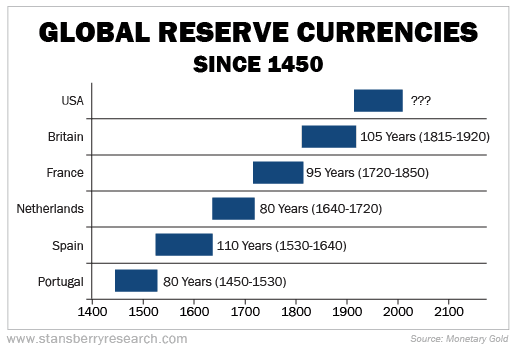 The IMF director is no free marketeer. Ms. Georgieva — I kid you not — holds a PhD in economics from the “Karl Marx Higher Institute of Economics.”

As you read that, try to imagine me doing really big air quotes around “economics” when used in the same sentence as Karl Marx.

The truth is, Ms. Georgieva and her central banker buddies are all Marxists at heart. They crave control and have long been seduced by power. They think the economy can be manipulated as if it’s some simple machine to be tweaked here and poked there.

But when they tweak and poke, it’s our lives they’re messing with. They’re devaluating our hard-earned savings and causing prices to rise far faster than our salaries are. They’re making people like you and me struggle — all while their banks produce and enjoy the benefits of the new money before its inflationary effects are felt.

The IMF director conceded that she and her allies are “sometimes like eight-year-olds playing soccer,” always grouped around the ball without understanding the bigger picture and covering the whole field.

Truer words were perhaps never spoken. Central bankers are myopic and fail to realize (or care about) the broader implications of their inflationary actions.

If your kids have read The Tuttle Twins and the Creature from Jekyll Island, they know more about how this all works than most of the people who work for central banks do.

And if your family doesn’t have a copy, we’re giving one out for free in partnership with Glenn Beck! All you pay is shipping. Get yours here.

Let’s not be seduced by a single admission from central bankers that “they got it wrong.” They did, but they aren’t going to learn from their mistakes. Why? Because their money-printing adventures aren’t a “bug” — they’re a feature of the system. It’s how these institutions work.

It’s all they know how to do. It’s why fiat currencies inevitably hyperinflate, and it’s why (as shown in the chart above) that all fiat reserve currencies fail.

All we can do is prepare for the inevitable. Make wise decisions, save and invest, utilize alternative currencies, and explore how we can hedge against the collapsing house of financial cards.

Get started by ordering a free copy of our book (either for you or a friend)!

Reading our books, your kid will know more about how the world actually works — and what’s right — than any “PhD in economics” from a Marxist university…