“Because ‘our system does not permit agencies to act unlawfully even in pursuit of desirable ends,”… the Court Declares unlawful and vacates the Mask Mandate.”

Those were beautiful words to hear on an Easter Monday, courtesy of one Kathryn Kimball Mizelle. This federal judge from Florida finally ruled out loud what we’ve all been thinking. (Those of us with enough functional brain cells, anyway…)

For over two years, the CDC was found to have improperly used its authority to force riders on public transportation to cover their faces or face penalties.

All this hinged on an obscure section of the 1944 Public Health Sanitation Act the CDC used to justify their overreach. Thanks to a well-prepared legal brief from the plaintiff, the judge blew enormous holes in the agency’s use of mask mandates to support a sanitation measure.

Of course, much damage has still been done by this point from federal agencies colluding to enforce this mandate. Those having regulatory power over public-facing operations, such as OSHA or TSA, have bashed this new club over the heads of non-compliant people. Some employers took this to such extremes that ordinarily good employees would lose their jobs out of the supposed spirit of “protecting people.”

The government in this case crossed the line separating reasonable actions designed to keep people safe and entered territory where it was grabbing power for its own sake. What we had taken for granted as normal, everyday living suddenly changed to reckless endangerment of our neighbors.

Those who didn’t comply risked losing their freedom of movement, in some cases their employment, and were kept there by the inertia of public opinion, grounded in fear and paralyzed through propaganda.

Whether you choose to cover your face anywhere is your decision. You act accordingly based on how you judge the risk to your health with the data presented to you. Of course, not everyone has the same access to information or understanding of how to question it.

But the data shows — if we’re willing to actually look at it seriously — that mask mandates did nothing to stop this virus: 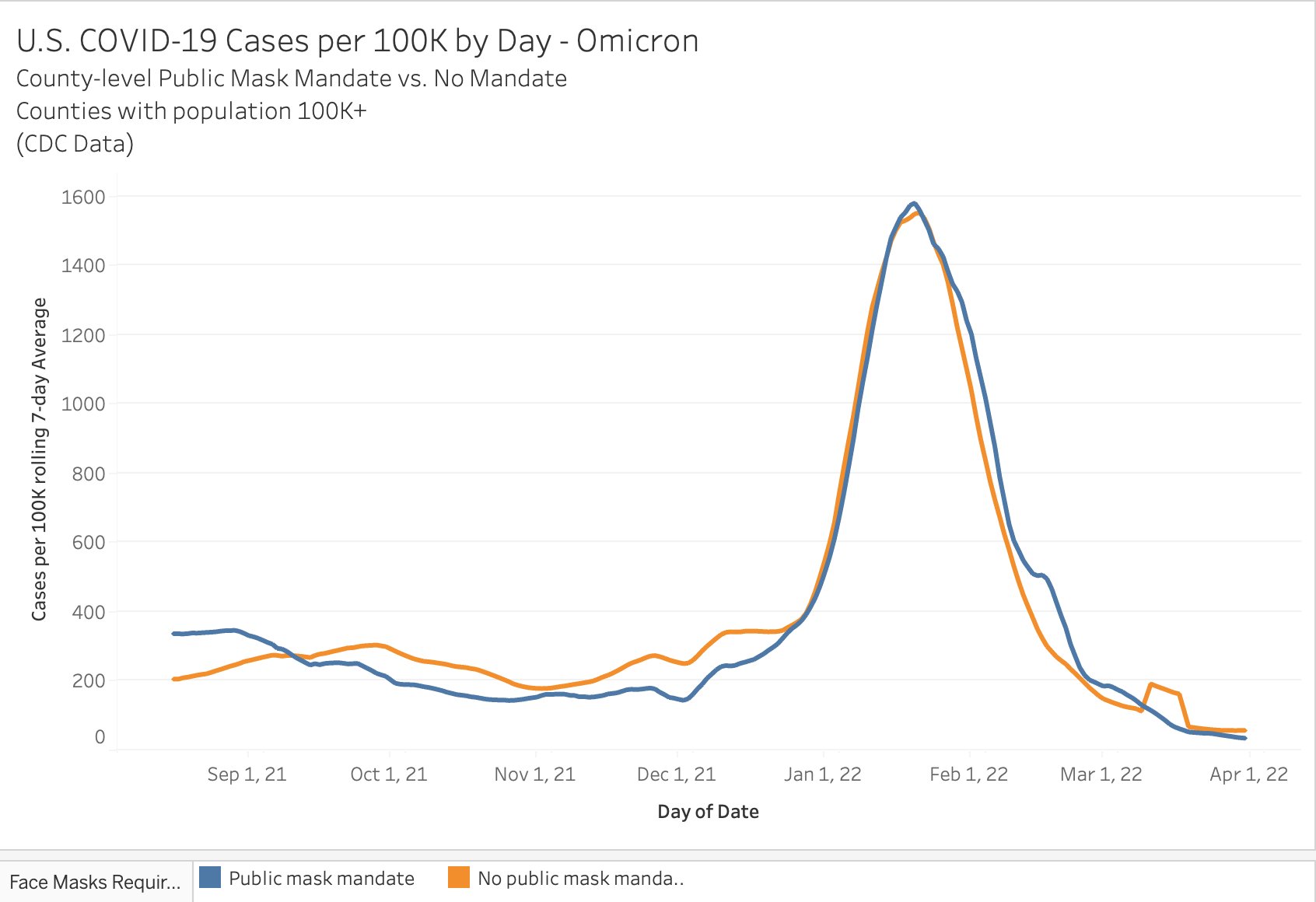 Despite data clearly showing this heavy-handed approach didn’t work, it took a lot of citizen action to get to a point where a check on the executive branch allowed us to breathe freely in public. And not just the visible action we saw at lawmakers’ offices across the country.

This particular court case was originally filed in June 2021 and saw its day in a federal court thanks to the tireless efforts of Dr. David Martin, George Wentz, and many others supporting the Health Freedom Defense Fund. It built on arguments from both successful and unsuccessful filings, including the Medicare and OSHA hearings earlier this year, most of which could not have progressed on one person’s efforts.

These causes are why I founded our think tank, Libertas Institute. Over those same two years, we’ve helped small business owners navigate the restrictions in real time and ensure future emergencies in our state don’t encroach on individual liberties. We’ve partnered with groups across the country to coordinate efforts to push back as best we can.

What’s clear is that our essential freedoms are all at stake for the next agency overreach—and it takes an informed citizenry to make it stop (or prevent it from ever happening).

That’s the power of our Tuttle Twins books. They educate entire families about the ideas of freedom and what our rights are. They create a foundation of understanding that can empower parents and children alike to be ready to defend their freedoms when under attack.

Understanding precedes action. Let’s make sure we’re having conversations with our children about current events and discussing what we can do next time an overreaching government attempts to restrict our rights.