The Danger of Raising Free Thinkers

With all this talk of “kids in cages” lately (or, when it was only Trump doing it…), I thought I might share some musings on the subject.

Oh, did you think I meant immigrants at our Southern border?

I’m talking about two teenagers who were arrested for putting anti-lockdown stickers on telephone poles in Moscow, Idaho.

I won’t get into all the details—they can be found in this news report—but here’s a quick rundown on what happened.

This all started with a “Psalm Sing,” a peaceful protest against COVID-19 lockdowns. It was organized last September by Douglas Wilson, a 67-year-old pastor at a local church. Several attendees were arrested. Charges were later dropped, but the local government’s grudge against the family remained.

Douglas has a 47-year old son, Nathan Wilson. He is a bestselling author and TV producer, and he also lives in Moscow. In light of the arrests at the Psalm Sing, he decided to come up with a sticker to highlight the draconian nature of the city’s government and law enforcement.

But arrests and criminal charges? Seriously?

Throughout history, teenagers have loved giving local law enforcement good reasons to arrest them—and when it happens, it typically tends to be well-deserved. But this time, I’m finding myself on the rebellious teenagers’ side.

For starters, these boys were using their freedom of speech to voice dissent. A lot of kids would see that their dad made a political sticker and give it nothing more than an eye roll. So props to this family for having raised kids that will actually walk around town putting the local petty tyrants on blast. (The stickers were temporary and did not deface any property.)

Unfortunately, the Moscow Police and City Council didn’t exactly see it that way.

Here’s an account of the arrest from Nathan Wilson, taken from a press release published by a business associate.

“So, I wake up in the middle of the night to a call from an officer,” Wilson said. “Officer Waters. And he asks me to come get my sons off a street corner—Rory and his little brother, who is fourteen. Waters was very serious, like something enormous has happened. I was relieved when he told me my boys were okay. They were only a couple blocks from my house, so I got there quick…

[T]he first thing Officer Waters says when telling me that my sons were putting these protest stickers up, is that he does not agree with the messaging. I told him that I supported and understood the messaging. After that, he refused to allow me to approach my minor son, where he was being interrogated on the hood of a cop car. I tried to keep things friendly, to diffuse the crackle in the air, but the atmosphere remained pretty strained.”

Later in the statement, Wilson recounts finding out exactly what happened before he’d arrived at the scene.

“It wasn’t until I got my boys home that I learned that two officers had actually handcuffed Rory and put him down on the concrete to interrogate him. And no, they didn’t read him his rights. They also took my minor son away from his handcuffed brother, lied to him about the law and his rights, and interrogated him alone. If I had known all that when I had arrived on the scene, I would have been pretty irate…not calm and sleepy.”

Now, both sons and their dad are facing multiple misdemeanor charges for the heinous crime of putting stickers on telephone poles. As it turns out, in Moscow, there is a “no posting” ordinance on the books, making it a crime to put a flyer or sign up in town without permission.

Oh, by the way, the rule had never been enforced before. But that’s not stopping the city attorney from pressing 13 counts of illegal posting to Rory, and even pressing juvenile charges to his younger brother.

Does this rub you the wrong way? It certainly should.

The way I see it, the best thing we can do for Rory and his younger brother is to make sure they’re in good company.

If we want a future where kids aren’t handcuffed and turned into criminals for dissenting against the local government—or any government—I suggest that we need to raise more freethinkers like the ones in this story.

That’s exactly why I wrote The Tuttle Twins Learn About the Law. It’s an age- 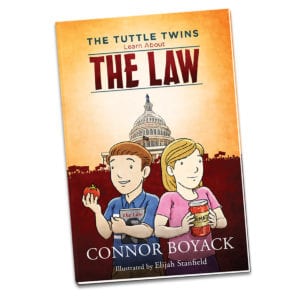 appropriate warning of what happens when we let government villains take over our lives and use the law against us.

Because, as the book points out, not all laws are truly laws. And bad laws can (and in some cases should) be broken.

Preserving our liberties sure seems like an uphill battle right now, but Emily and Ethan Tuttle are here to help you teach your kids about our rights—where they come from, why they’re in danger, and what we can do about it.