Been one heck of a week, hasn’t it?

For starters, Canadian truckers and their “Freedom Convoy” have mounted a stunning protest against the draconian Covid rules forced by Justin Trudeau and his band of lower-government cronies.

In fact, so many trucks have joined the ever-growing convoy (to the tune of more than 50,000), it broke the world record for largest truck parade ten times over!

It wasn’t only truckers protesting, either: fed-up Canadians lined the highways to greet the convoy, waving signs of support and cheering on their countrymen. (It didn’t take long before certain bureaucrats in Nova Scotia decided to outlaw protesting from the side of the road… yep.)

I have to be honest: watching all of this is a little embarrassing for us Americans. Have we really let ourselves slip so far into complacency, we’re getting out-protested by the world’s most agreeable people? We’re supposed to be the crazy individualists, for crying out loud! 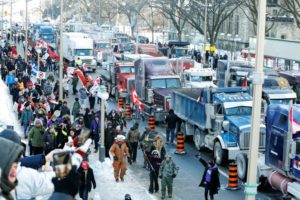 In all seriousness, it’s been a real bright spot to see thousands of our Northern neighbors stand up to their horrifically authoritarian rulers. Just like Australia, Canada’s handling of the pandemic has been a pretty great reminder of what’s at stake if we forget (or stop caring) about our individual liberties.

Lest we forget, Canada and Australia were once free democracies: you know, embracing the Western tradition of representative government and personal liberty. Fast forward to today, and unjabbed Canadians can’t even grocery shop without a government babysitter! And don’t even get me started on Australian quarantine camps…

But, as we’re seeing right now, these draconian rules have not been without, ahem, consequences.

Apparently Justin Trudeau didn’t want to deal with these consequences, because when the convoy hit the capital city of Ottowa, he was nowhere in sight. After claiming he’d been exposed to Covid and needed to “quarantine,” he took the cowardice a step further, and was whisked away to a secret trucker-free location.

It’s not such an unfamiliar scenario to us Americans, is it? While serious problems arise–soaring inflation, prolonged lockdowns, Covid test shortages, tensions on the rise in Russia, to name a few–our President is nowhere to be found.

Or, rather, his staff is hoping he isn’t found. I’m guessing they have him right where they want him: squirreled away with an ice cream cone and a coloring book, somewhere in the West Wing, until they have his teleprompter ready for the next “press conference.”

And as long as the media keeps sticking to the scripted questions and leading with segments on his new cat, everything will keep ticking just fine.

Eventually, we will truly understand what happens when the leader of the free world lies to the public and hides from his job. There are consequences on the horizon.

People are fed up with being lied to and taken for stupid. And the more we all make that known, the more the establishment loses its mind.

You know how I know?

Because a podcast hosted by a Bernie-bro-MMA-commentator-slash-comedian is becoming the center of global controversy. Crosby, Stills, and Nash are weighing in, for Pete’s sake. And over what? Evidently, the thought crime of interviewing two prominent healthcare figures with unique perspectives on Covid-19.

It’s pretty unsurprising that Joe Rogan is making a mockery of CNN’s ratings. I have a feeling it has something to do with the fact that he doesn’t treat his constituency like they’re idiots. He interviews all sorts of folks, and (gasp) lets people make their own minds up!

Our mainstream media and government could learn a thing or two from him, but they won’t. Instead they’ll paint him as a bigot, a white supremacist, and a greedy charlatan spreading dangerous misinformation.

The good news? It’s not going to work. In fact, it will continue to backfire.

We’ll see it in this year’s elections, when people who’ve been lied to repeatedly by the government and its crony medical establishment enter the privacy of the voting booth. It’ll be game over for the Democrats and their Covid regime.

Let’s just hope that when the pendulum swings, it’s back to the ideas of liberty: the same ones that brought this nation from a ragtag band of farmers to a global superpower in under 300 years.

I’ll admit it, thinking about where our country is headed can be scary, but it doesn’t have to be. We know that the future is in the hands of today’s children. That means ensuring America’s future starts with kitchen tables and bedtime stories. 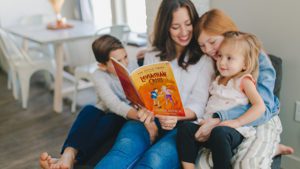 This is why I wrote the Tuttle Twins series: to help parents with the daunting task of raising peaceful protesters, critical thinkers, and status-quo-questioners. We can’t afford to fail the next generation when it comes to the ideas that matter.

If you’ve been on the fence about buying a Tuttle Twins book, this week has been a great reminder of the stakes. Canadian truckers and fearless podcasters are awesome, but we’re going to need a whole lot more folks with that kind of spit in the years to come.

Join me and the Tuttle Twins team in ensuring liberty survives another generation.