It’s Doomsday for the Unvaccinated, According to the White House

The briefing was everything you would expect from the current administration—that is, despairing, humorless, and utterly detached from reality.

Biden made his feelings known (at least, as best his Teleprompter would allow him) on the Omicron variant… which, need I remind you, has yet to cause a single death in the United States.

“It’s here now, and it’s spreading, and it’s going to increase … We are looking at a winter of severe illness and death for the unvaccinated – for themselves, their families and the hospitals they’ll soon overwhelm.”

The next day, Zients elaborated on the sentiment in a lengthy follow-up. 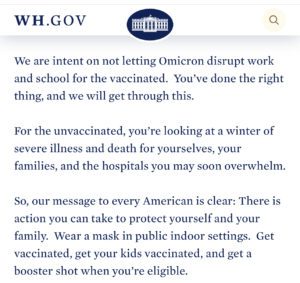 “We are intent on not letting Omicron disrupt work and school for the vaccinated. You’ve done the right thing, and we will get through this,” he said.

“For the unvaccinated, you’re looking at a winter of severe illness and death for yourselves, your families, and the hospitals you may soon overwhelm.”

As wild as it is to hear this kind of vile slander spewed from the White House, none of us should be surprised. For nearly two years now, our bureaucracy has systemically separated Americans into groups of “good” and “bad” on the basis of our compliance.

Well, to quote George Orwell, “Truth is treason in the empire of lies.” That line has long been a favorite of Dr. Ron Paul’s, and I think we’re just now learning its true meaning.

Think about it. Sharing a personal story about a vaccine injury on social media will get you slapped with a Covid-19 disclaimer. Posting a study showing natural immunity is more effective than a vaccine can also get you booted. Doctors who prescribe certain medications, no matter how effective, risk losing their medical licenses.

The “new normal” isn’t wearing masks or working from home. It has nothing to do with illness. It’s about blaming society’s problems on dissenters, as demonstrated by our highest levels of government.

“The more people get vaccinated, the less severe this Omicron outbreak will be. One hundred sixty thousand unvaccinated people have already needlessly lost their lives just since June, and this number will continue to go up until the unvaccinated take action,” Zients claimed from the podium, just before closing.

Biden has made it clear that he will skirt the law to force compliance on Covid: take, for example, his OSHA vaccine mandate that’s been tied up in lawsuits since he signed it a few weeks back. He and Fauci are constantly on TV talking about their “options” for getting more people to get the jab.

As French Economist Frederic Bastiat explained in his brilliant work, The Law, we are born natural rights to personal liberty. These freedoms aren’t given to us in exchange for something; they are ours, and they are unalienable. Therefore, perverted laws that strip us of these rights aren’t just a bad idea: they’re immoral and should be broken. 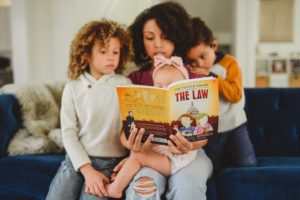 This concept is so important to me that it’s what led me to start writing children’s books in the first place. Our very first book, The Tuttle Twins Learn About the Law is a simplified version of Bastiat’s work that doesn’t skimp on the principle.

If you want to explain to your children why this moment—and how we respond to it—is so crucial to the future of our nation, look no further.

And if saying that makes me treasonous in the empire of lies… So be it.