It Turns Out the CDC is Actually Worse Than We Thought

I hate to sound like an alarmist, but… are you kidding me with this???

In today’s episode of, The Government Will Ruin Your Life and Then Tweet About it Gleefully, I present the head of the CDC, Rachael Walensky, celebrating the “sacrifice and suffering” of African American men used as guinea pigs by Big Pharma and the US Government. But first, a little refresher:

The Tuskegee Experiment- A Lesson in History

In 1932, the United States Public Health Service began what would become one of the most unethical medical studies in history. The Tuskegee Experiment followed the health of 600 black men-399 with syphilis and 201 who did not have the disease. These men were told they were being treated for “bad blood,” a local term used to describe various illnesses. In reality, they were part of a study to observe the progression of untreated syphilis. The men were told they would be treated for their illnesses and given free medical care. They were also given free meals and burial insurance. In return, all they had to do was show up for regular checkups at the Tuskegee Institute hospital.

The study was originally supposed to last 6 months, but it ended up lasting 40 years. During that time, the men were never told they had syphilis and weren’t given any treatment for it, even as the disease progressed and caused neurological damage, blindness, and even death in some cases. As the experiment went on, doctors continued to recruit new participants so that they could observe how the disease was passed down from generation to generation.

By 1972, news of the experiment had begun to leak out, causing a public outcry. An investigation by the United States Congress uncovered horrific details about how the experiment unfolded and how its participants were treated. As a result of the scandal, laws and regulations surrounding human subjects in research were changed to (supposedly) protect future generations from being subjected to such unethical practices. There are still ten surviving children of the experiment’s victims who collect medical and other benefits from the government as payment for their fathers’ abuse.

So what did Ms. Walensky have to say about the 50th anniversary of what is still regarded as one of the worst human rights violations in US history? 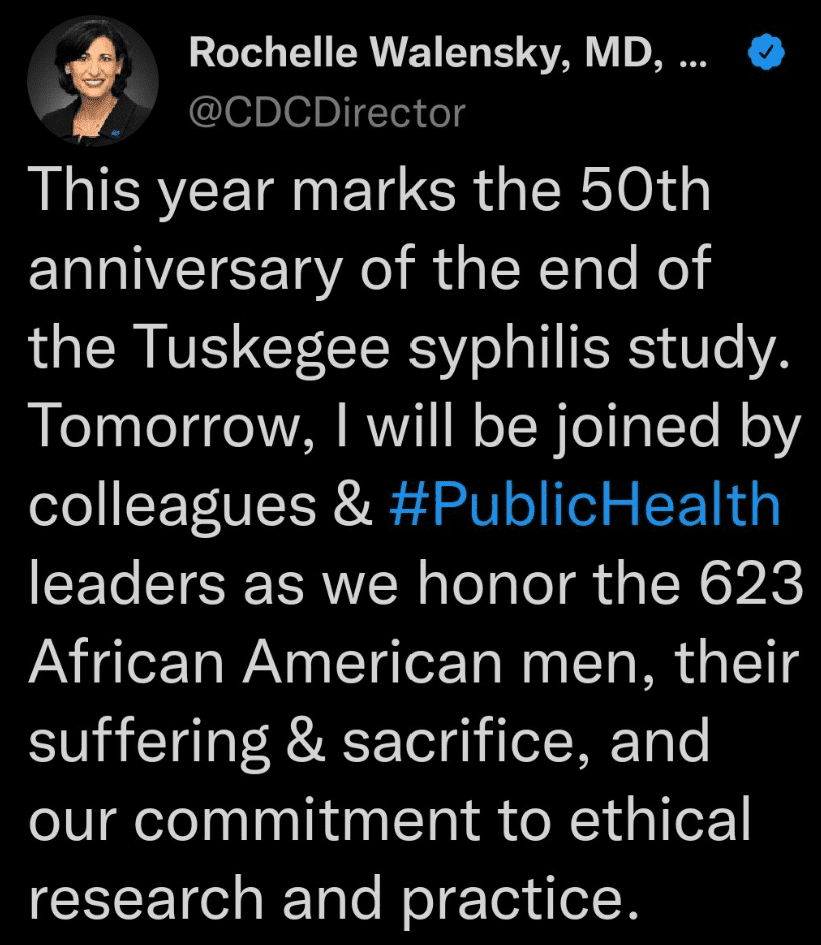 Talk about being totally disconnected from reality! Has the CDC really become so immune to their own villainy that they can no longer distinguish between people who willingly suffer or sacrifice for a cause they believe in, and those who are targeted because of their vulnerability and then used and abused—their lives ruined—for some imagined “greater good”?

A tweet by Clifton Duncan, a successful stage actor who refused the covid vaccine and was subsequently blacklisted from acting, summed up my feelings pretty well. I wonder how many people don’t know the ugly details of Tuskegee (or any of the other dozens of awful crimes the government has committed against innocent people)? One of the things that has been the most frustrating these last several years has been watching history repeat itself and finding so many people totally unaware of the patterns of government lies and abuse. It’s like watching a bad remake of a bad movie!

That’s one of the reasons we tackled the huge project of telling the real history of the United States, and building a corresponding homeschool curriculum. We owe it to our kids (and ourselves!) to know what has happened in the past so that we can recognize when tyrants and traitors employ their age-old tactics for control and coercion against us.

Check out the sample pages on our website, and give your kids the gift of inoculation against people like Rachael Walensky and their dangerous rewriting of history.

It’s up to us to stop these people.