You guys, get a load of this:

“The Tuttle Twins series is among the most wretchedly contrived, grotesquely unethically indoctrinating, cliché-ridden heaps of steaming garbage I’ve ever had the misfortune to read.”

A few days ago I awoke to discover that the ultra-liberal magazine, Current Affairs had devoted a significant chunk of their print and online space to a detailed “takedown” of The Tu 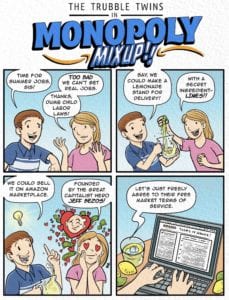 ttle Twins. They even got an illustrator who copied Elijah’s style and created some mock-book illustrations and a comic strip.

I mean, you guys, they went to a ton of work to put this piece together! And at the risk of sounded totally conceited, I have to say I’m enjoying an “Ahhh… we have arrived,” moment. I mean, yeah, our books have sold over a million copies; and yeah, we’ve got an award-winning economics curriculum; and yeah, we’ve received over $160,000 in investments in our new cartoon in just the last few days; but when a magazine with a “progressive perspective” wants to criticize our work, it’s hard not to take a step back and just soak it all in.

I really want everyone to take the time to read the article in its entirety, but I’ll give you a teaser just to whet your appetite. Here we see the reaction of the woke tolerant to the inclusion of a strong, female, African American character holding a recurring role in the series:

Oh! The humanity! A person of color is portrayed in a non-collectivist way! This must immediately be condemned!

The writer, in fact, takes specific issue with each person of color included in the books and misses no chance to make the claim that non-white Americans are socialists and thus should not be “used” to “spew” free-market principles of empowerment an

d entrepreneurship. That sounds a lot like racism—believing that all people of a certain skin color must think, act, and value things the same—but what do I know?

Even our teen, Choose Your Consequence, books aren’t spared the harrowing criticism and profanity-laced ranting of the reviewer. He seems to take particular issue with the idea that Emily and her family would choose to pay to replace a beautiful stained glass window of a church that was damaged by an errant baseball in order to keep the parishioners from having to pay a hefty deductible to have it replaced through their insurance.

The article reads pretty much as you’d expect. Religion is mocked, those who don’t agree with the writer are stupid and evil, children are portrayed as gullible little dummies who will believe anything and have no sense of reason or rationale, and government is lifted up as a savior without which everyone’s lives would be literally ruined and everyone would probably be destitute and starving.

You know. The norm.

You may be wondering how I have chosen to respond to such an attack on something that obviously represents my heart and has occupied much of the last six years of my life.

Well, I am a capitalist, after all. So the first thing I did was purchase a print copy of the socialist magazine. I think I’m going to have it arranged in a shadowbox so that I can display it proudly in my office, but I might just keep it on my desk for awhile as a reminder that all of our work is making a difference in the world.

The second thing I’m doing—see aforementioned “capitalist”—is monetizing on the hate. Coupon code CURRENTAFFAIRS will get you—and everyone you share this message with— a whopping 50% off our kids books.

While I wait for my magazine to arrive I’ve printed my favorite excerpts from the article as a daily motivation to keep fighting the fight! It reads:

“The Tuttle Twins series is among the most wretchedly contrived, grotesquely unethically indoctrinating, cliché-ridden heaps of steaming garbage I’ve ever had the misfortune to read. Written to bring young people into one of the most disgraceful political tendencies in the world before they have the critical thinking skills to recognize it, it is a hideous fraud and an ugly twisted farce.”

I feel like we all share in the credit for this great work—without the humbling support of our readers and subscribers, we would never have found ourselves with a target on our backs. To you, my friends, we are indeed grateful!

Remember: coupon CURRENTAFFAIRS gets you 50% OFF this week — share it with your friends and let’s keep these socialists afraid of a rising generation that learns to love liberty!