Yesterday was a pretty bad day to be Joe Biden.

By that, I mean it was a bad day to be a petty tyrant attempting to bully millions of businesses into forcing an experimental medication into their employees’ bodies.

And as nice as it is to see the Supreme Court affirm many Americans’ most basic rights to bodily autonomy, it shouldn’t have taken a battle at the highest levels of our judicial system.

That’s also not to mention the eighteen million healthcare workers whose rights were completely ignored in the ruling. (Do doctors and nurses have different fundamental liberties than welders and cashiers? Apparently that’s what we’re supposed to believe…)

Ruling aside, one of the most interesting events of the case’s oral arguments was courtesy of Justice Sotomayor, an Obama appointee who’s sat on the bench since 2009.

During arguments regarding vaccines and the virus, she claimed, “We have over 100,000 children, which we’ve never had before, in serious condition, and many on ventilators.”

Needless to say, this claim is… complete and utter baloney. So much so, even left-leaning outlets like CNN, the Washington Post, and Politifact were forced to point out that she was wrong.

Unsurprisingly, her Twitter talking points about the need for vaccines didn’t hold people’s attention for long. This is because, as alarming as it is to hear nutty Covid conspiracies from the halls of the Supreme Court, she’s far from the only one drinking the Covid Kool-Aid.

A large portion of the country truly believes that this virus is a national security threat worthy of halting the economy, setting our children back by years in their education and development, and forcing people into horrific isolation, causing mass mental health issues.

Now that the Covid regime is finally showing signs of collapse, these poor people have no clue what to do with themselves! It’s actually kind of sad to watch.

All you have to do is log onto any form of social media, and you’ll see it: millions of people are so addicted to fear, they’re unable to fathom a world in which viruses aren’t dictating the quality of our lives. And they’re not about to let silly little facts get in the way of the pity party.

The worst part? Our government is complicit in every bit of this hysteria.

“Fifteen days to slow the spread!”

“We all just need to do our part to fight this virus.”

“This is just a temporary emergency. If everyone follows the rules, we’ll go back to normal soon.”

You’ve heard them all before. Chances are, even from people you respect: colleagues, family members, friends.

But these catchphrases didn’t crop up organically: they came from press conferences, government ad-campaign-propaganda, and the blue-check-mark pundit class that feeds off of our bureaucracy like a parasite.

This statism is far worse and far deadlier than a virus: it’s an addictive drug. It holds millions of otherwise reasonable people in its grip and squeezes all kinds of concessions out of them in return for false promises of “safety” and a “moral society.”

So, what’s the cure?

Among other long-term fixes, I recommend a good old-fashioned wake-up call from my friend Murray Rothbard. Specifically, his book Anatomy of the State. It’s a damning rebuke of the death-by-a-thousand-cuts we suffer when the government is allowed to become too powerful. 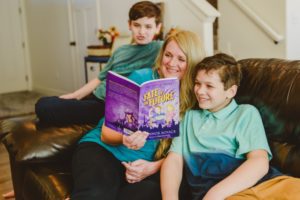 This book is a must-read for anyone who loves liberty, but I’ll admit it’s on the dense side. So, to cater to the next generation, I spun Rothbard’s ideas into a fun story that kids can understand: The Tuttle Twins and the Fate of the Future.

This book will teach your kids all of the important concepts you’ll find in Rothbard’s book, but in a way, kids can actually enjoy… That is—until they’re ready for the real thing.