Stand Up to Critical Race Theory in Schools

Over the weekend, Americans celebrated Juneteenth, a holiday commemorating the day the news of slavery’s end reached Galveston, TX.

In many ways, this celebration is the fulfillment of Independence Day. It represents when our nation’s then-laws were measured against our God-given rights to life, liberty, and the pursuit of happiness… and the God-given rights won.

And in this regard, Juneteenth is perfect proof of why Critical Race Theory should not become a pillar of what we teach our children about the United States.

You see, a core component of CRT is the idea that America is irredeemable, that capitalism is a pillar of inequality, and that all people fit into either the mold of “oppressed” or “oppressor.”

In contrast, Juneteenth reminds us that America is indeed capable of making positive changes, and rewarding natural rights over the tyrannical tendencies of man and government. Our history shows us that if we dedicate ourselves, we can use our founding principles to correct our legal inconsistencies without depriving anyone of their personal liberties.

This is why I am so vocally opposed to this idea that America is an inherently racist country: if that were true, we would have never seen the end of slavery, the increased protection of civil rights, and the celebration of Juneteenth.

Make no mistake: America has had its problems, slavery being one of the most glaring. (Of course, plenty of other countries institutionalized this evil as well.) But without a foundation to fall back on, we never could have corrected this mistake… at least, not without falling apart as a country.

Today, the very ideas that made it possible to eradicate the evils of slavery and racial injustice are being used as a scapegoat for… more racism. It’s Orwellian and weird.

Don’t take it from me: take it from the mom who stood up before Loudoun County, Virginia, where a notoriously out-there school board has fully embraced CRT in its curriculum.

“An honest dialogue does not oppress. It does not implement hatred or injustice. It’s to communicate without deceiving people.”

Honesty in dialogue doesn’t prevent us from confronting problems of injustice. Far from it: freedom of speech and open debate are the only ways we can ever reach the solutions to the deep, dark problems we face as humans and as Americans.

But it’s not just this brave parent standing up—across the country, people are waking up and showing up to make their voices heard.

You may have seen the swaths of parents standing up to oppose Critical Race Theory in school board meetings recently. Their fiery speeches remind us that not everybody’s on board with the crazy train.

It’s a breath of fresh air to see fired-up moms and dads pushing back on the bureaucrats trying to control the future through the public education system.

And while I’m encouraged to see people pushing back on the dangerous narratives the “woke” left is pushing on our children, there’s still a lot of work to do… And that begins with parents taking charge of what our children are learning. 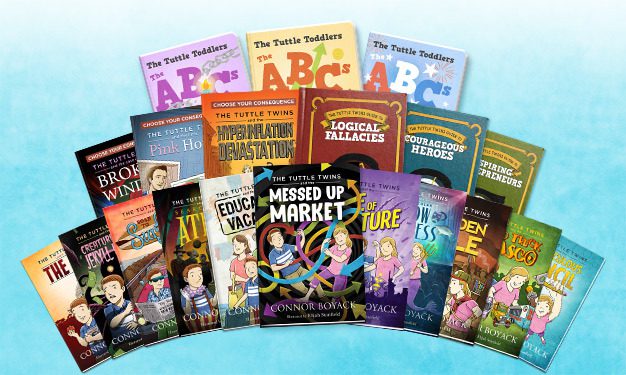 You probably get my emails because you’ve purchased one of our books for your children. Here’s why I started writing these books: I wanted to teach my own kids about the time-tested ideas of freedom that are being threatened.

The Tuttle Twins books were quite literally born out of concern for the future. And if you share that concern, you can share in the solution. We have books for every age group, from toddlers to teenagers, all focusing on the ideas of personal responsibility, freedom, and open dialogue.

Our books can’t fix it all, but they sure can give you one more way to push back: by teaching your kids to think critically and find the truth.