The Sinister Plot Against Public Schools

If you’re a consumer of mainstream news, you’ve probably encountered reports of a sinister plot bubbling up among America’s scariest fringes… And it has the chance to change our country forever.

Who are these people, you might ask? Despite what you’d think based on their media profile, they’re not terrorists, or a political party, or group of anonymous hackers, or foreign actors here to meddle in our elections. They’re… conservative, Christian parents! (Oh, the horror!)

These radicals, according to recent reporting, are working to “hijack” the education system as we know it. By committing the unthinkable act of educating their own children, many of these parents  are brainwashing their children into believing bigoted and outdated concepts such as  “personal liberty,” “objective truth,” and “real history.”

Very seldom do homeschooled children learn government-approved concepts such as Critical Race Theory and Common Core Math. I don’t mean to alarm anyone, but if this homeschooling stuff catches on, we could have a serious crisis on our hands…

Since the pandemic began, over 2.6 million kids were switched to homeschooling. Just imagine the damage that’s possible if this trend continues. Where will our country be in 50 years? 100 years? It’s scary to imagine all those kids, forced to believe in freedom and autonomy, only to take those values into their own families, the workforce, the voting booth… I shudder just thinking of the possibilities!

If this isn’t stopped, the government will eventually have no say at all in what children are learning. Parents would get to decide exactly what they want their kids to learn, no matter how radical their beliefs are… Can you imagine?

Not to mention, hundreds and thousands of government employees at the Department of Education would be without a job… Let’s just say the Greater Good would suffer immensely.

If you’ve made it this far, hopefully you know by now that I’m being sarcastic— thanks for indulging a well-deserved moment of satire.

In reality, I’m one of those crazy parents these news articles are talking about! My two kids have long been homeschooled, and I’m proud to say we teach them all kinds of things that our government thought police would hate. Most importantly, that each human being is born free with rights that nobody else can take away. Not exactly what they’re teaching in public schools these days…

Stories like the one I referenced from NBC are nothing but an assault on the character of parents just trying to do what’s best for their kids. And the reasoning behind these attacks are pretty thinly veiled: they are, of course, political.

I have to believe that if there was a widespread homeschooling movement among Democratic Socialists, or BLM supporters, or Women’s March attendees, the attitude toward their “education vacations” would be quite different.

But, because parents of our persuasion pose a threat to the institutions and establishments that rely on brainwashing the young to survive, we have been made into public enemy No. 1.

A word of advice: rather than letting this discourage you, or guilt-trip you into thinking you’ve done something wrong as a parent, think about who the pushback is coming from.

Do you care what the Teachers Unions — the ones that fought to keep your kids learning from Zoom for two years — think about your parenting?

Do you care about what the government — the same one that stunted the development of an entire nation’s children in the name of a virus that only affects adults — thinks about your decision-making?

Do you care what the media — that routinely lies and covers up aforementioned government wrongdoing — thinks about your values?

There’s an old maxim about not taking advice from people you don’t look up to or respect. So, unless you look up to CNN and Joe Biden and Randi Weingarten, forget about what they think about you.

And with that, it’s time to build your team. Ask yourself, who’s in your corner? Hopefully you have some like-minded friends, family, or neighbors to lean on as a support system. If not, keep going — you’ll find your people!

But what about how you actually teach? That’s where the Tuttle Twins team jumps in.

We’ve got books on all the important ideas that you’d never hear in a public school: personal liberty, economics, logic, entrepreneurship… we even have a history textbook coming in just a few weeks! And we’re just getting started. 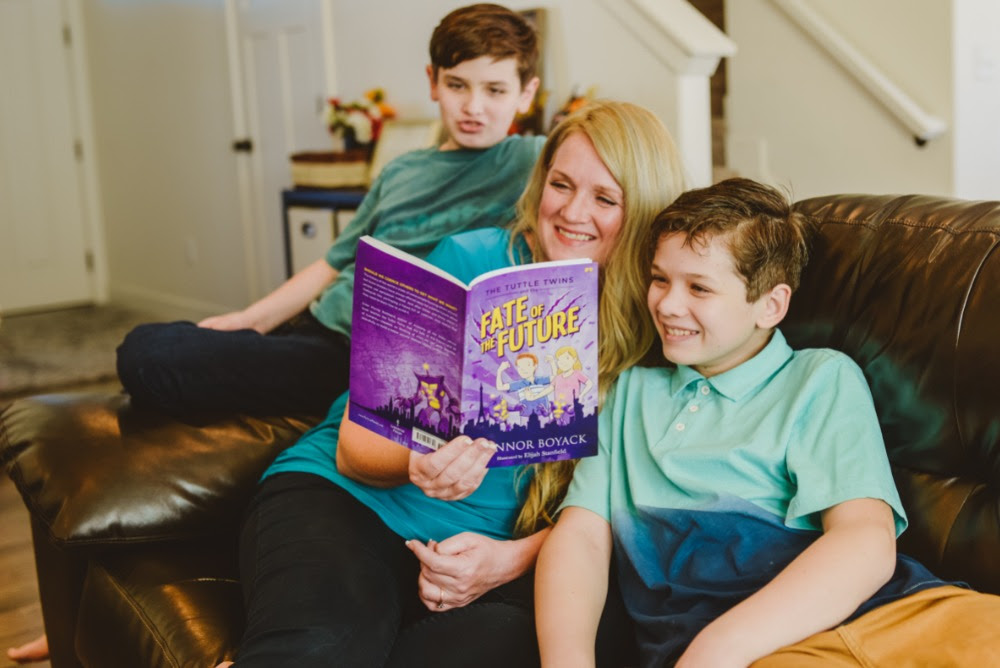 The best part is that our books are meant to complement a variety of educational situations. No matter what your family’s learning structure looks like, we can partner with you to make sure your kids are learning all the important stuff.

If you’ve been on the fence about trying out our content, there’s never been a better time than the present. But don’t take my word for it… take it from CNN!

“The books, written by Connor Boyack, are meant to protect children from the “socialism and woke-ism” that the website says American educational and cultural institutions are “pushing into the minds of our kids.” A cartoon on the site shows a mother wielding a Tuttle Twins shield while protecting her frightened children, absorbing the arrows of socialism, Marxism, collectivism, and “media lies.”

If that sounds like your thing, pick up a book (or two, or three!) today and give the establishment a piece of your mind.

By the way, we have a money-back guarantee. So, join me! There’s nothing to lose.