A friend of mine recently remarked that there were, “no good reasons left for families to have their kids in public education,” and that, “any and all sacrifices should be made to get them out.”

At first that sounded kind of harsh, but I know her pretty well, and I know that she used to believe that there was some good left in public ed, and that alternative education wasn’t always the best decision for every family and every situation. So I asked her what had changed her mind—why was she now adamant that there was no length to which parents shouldn’t go to get their kids out of the “system”?

She pointed to a culmination of the last two years—covid policy, teacher activism at a fever-pitch, abysmal education outcomes—but said that the proverbial straw was a tweet she saw earlier this week:

It’s hard to argue with how bad things really are when you see stuff like this.

I can’t imagine the psychological impact this must have had on the child who sent that text message to their parent, or the impact it must have had on the parent. Those are feelings that were once experienced by only a very small percentage of people, and those people often required a lot of therapy to deal with the trauma. Now we’ve got this type of thing happening nationwide, and at a scale that would have previously been impossible to imagine.

Is this really helping? Or is this making a much bigger problem for what is already a generation of kids that seems to struggle with mental health and well-being?

I read an article the other day about a mom who made the tough choice to pull her very young child out of school because she just couldn’t rationalize subjecting her to active shooter drills. I get that.

Parents are hard-wired to protect their kids from harm of any kind, but what happens when it becomes necessary to inflict some harm in order to potentially protect a child from some greater harm? I can think of some situations where that would be something I might be willing to do, but I’m pretty sure that being able to have my kids in school would not be one of them.

I think I’m starting to understand where my friend is coming from. At what point is it all too much? And is there even any way to fix it? I consider the old frog in the pot analogy and can’t help but see public ed as the water, and parents as the frog.

John Taylor Gatto warned parents a long time ago that the public education system wasn’t designed to help kids become the best and most successful versions of themselves. He even recognized the potential it had to cause a breakdown of the family unit saying, “Government schooling is the most radical adventure in history. It kills the family by monopolizing the best times of childhood and by teaching disrespect for home and parents….” He dedicated his life to helping save kids and families from a system that he thought was actively causing harm. We think his work is so important that we wrote a book about it!

How far have things come since then? How much hotter has the water gotten? Social media is full of teachers who view themselves as prophets for their various lifestyles and ideologies—they are evangelical in the belief that it is their job to convert (they might call it “liberate”) as many of their students (other people’s children!) into their belief systems as possible.

And it’s working. I fear that parents greatly overestimate the influence they have on their children who spend the better part of their most formative years in the care and company of activist teachers.

So what must be done?

I don’t know if I’m fully in the camp of my friend who says that parents absolutely must get their kids out now, but I also don’t know that I think things are likely to get better anytime soon. And I wonder what the cost will be for parents who choose to stick it out while they work to make improvements. How many kids might be sacrificed in order to fix a system that, at its heart, is anti-family, anti-individual, and frankly, anti-actual education? 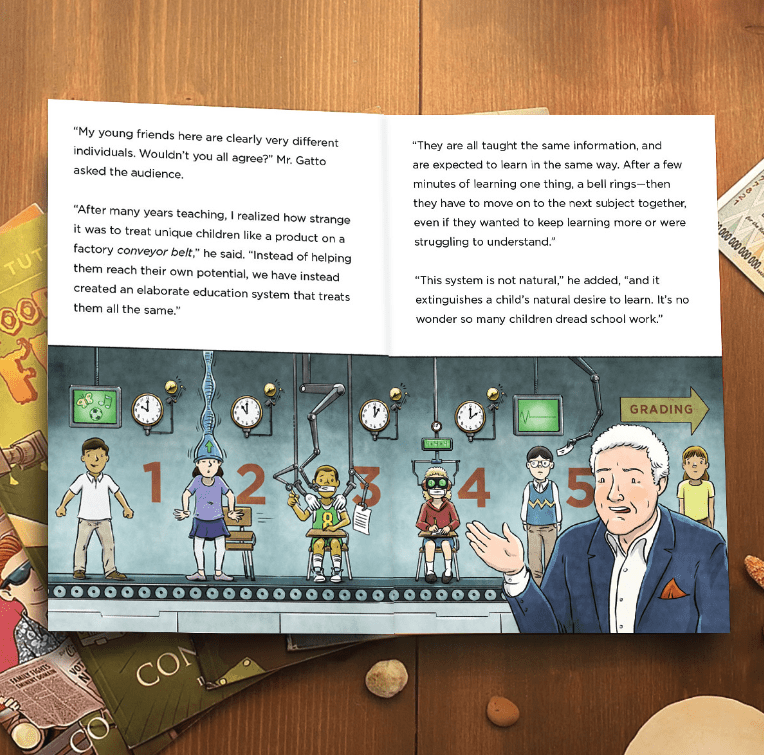 I think a lot of families have some tough decisions to make in coming years, and I’m glad that we’ve created a place where parents from all walks of life—and at all stages of home, public, private, or other education—can come to find community, and to have access to real resources that actually offer answers to why the world seems to have gone crazy, and what we can do to keep our families and communities learning and thriving.

Whether or not public school is the right path forward is something every family will have to decide on their own—heck even the Tuttle Twins were in public school for a good part of their lives!—but the good news is, you don’t have to be a homeschool parents to supplement your kids’ education with books and curriculum that teach them the truth about the way the world works, and how to find their place in it.

So whether you’re a veteran homeschooler, a busy charter school member, or following a more traditional education path, we’ve got tools to help you influence your kids for good and teach them the principles of a free and prosperous society.

After all, if you don’t, who will?